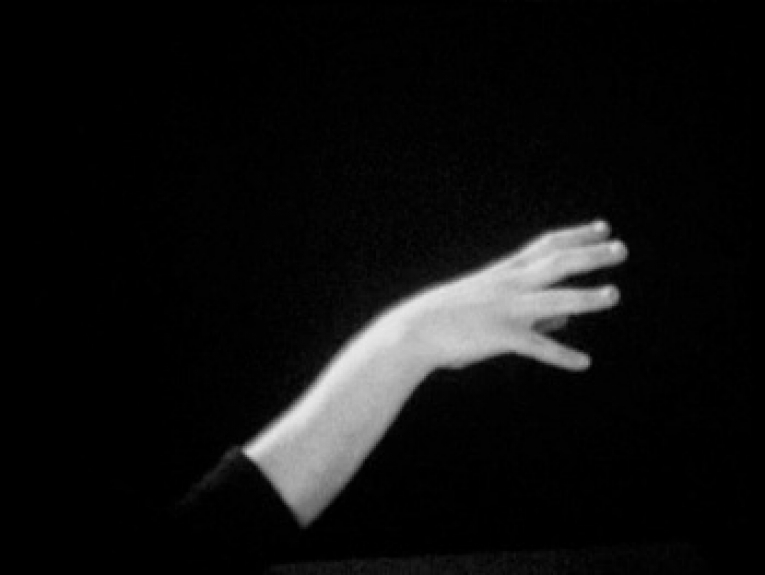 ARRÊTE LA MACHINE!
Movement of the Hand – Beating Time
Ulrike Feser (Performance: Jürgen Bogle)
8mm Film, 2009, DVD, 3:45 min, Loop, Farbe, Ton
2009 Galerie Kamm, Berlin
2010 Zeit. Ordnung und Irritation | Evangelische Akademie, Villigst
2011 M2O, Tübingen
"Working with Super 8 films and photography, Ulrike Feser documents pseudo-theatrical stagings of the human body and its sexes, building upon and, often, using as a template the motion studies of Eadweard Muybridge. Muybridge’s serial photo-studies of human and animal motion-sequences have caused many to consider him as a proto-filmmaker. Together with the choreographer Jürgen Bogle, Ulrike Feser repeats, re-stages, and re-interprets these photographic works, which emerged from Muybridge’s scientific interest in the workings of bodies in motion. Feser’s works both draw attention to the conversion of the privileged gaze – now a woman behind the camera – and challenge the photographic apparatus itself. Visual schematizations are thus destabilized and re-contextualized. „When the images of Eadweard Muybridge literally learned how to walk by showing people in motion (Human Locomotion, 1887), it became clear, on a technical level, that if sequences of images that consist of single, separated images are recorded and then projected, the single image nearly disappears in the flux and suffers the loss of its iconographic force. Although they still exist in substance, the discrete images cannot assert themselves against the motion, which captures them, for motion doesn’t know moments but only transition and metamorphosis. In the cooperation ,Studies III (on a movement sequence of Eadweard Muybridge) part 1 & 2‘ Ulrike Feser uses a Super 8 film camera to examine the relation between the singular images and motion suggested by Muybridge’s scientific test arrangements. As she shoots the improvisation of Jürgen Bogle, who interprets the movements and gestures (…) documented by Muybridge’s historical shots, the study grows in its theatrical dimension as the slow motion of the old works is revealed. Muybridge does not succeed in demonstrating a neutral body, which displays, without a minimum of narration, only the external effects of its muscular activity, for the subject’s naked body articulates insecurity. This insecurity points to the vestigial singular images that remain but are now invisible. Feser becomes the treasure hunter who accesses these glimmering icons of gesture, which, by means of the body in motion and the film material, are brought back to the surface of the motion picture (…) The historical and functionally positioned test arrangement becomes, in Feser’s work a complex survey (…), in which time, motion and gesture are analyzed as social, heteronormative constructs; this survey investigates also the unconscious workings of the photographic machine out of which the metamorphosis of the body is revealed, the insecurity and shame of the subject reappearing after Muybridge’s disregards of them. The photographic works of the series 'ARRÊTE LA MACHINE!' are also formed by a wholly different disturbance of the image and movement. Like the clog (fr. Sabot), which was thrown in protest into working machines to stop them and thus challenge the order of the human body and machines, and defined the word sabotage, (…) Ulrike Feser’s photographs are about the moment of mechanical cessation, which interrupts the cycle to enables a space of occasion.“  (Nicolas Siepen)